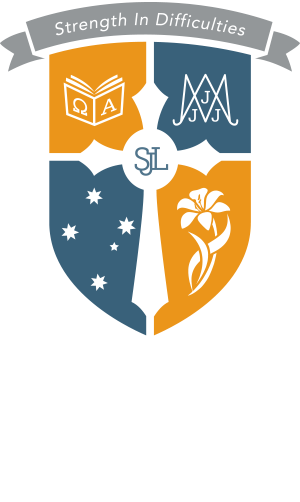 St Joseph’s was established by the Sisters of St Joseph in 1883 as a result of Bishop Murray’s invitation to a group of Sisters, who had been formed by Mary MacKillop and Fr Julian Tension Woods to establish a convent and school in the Diocese. Four Sisters from the Josephite Order – Sisters Ambrose Joseph Dirkin, Imelda Flood, Aloysius Cahill and Baptist Dugan arrived from Perthville, near Bathurst in September and what began as a small enterprise to meet the needs of local children quickly grew.

By 1911, a one-story brick school had been erected which remains today as our newly refurbished Creative and Performing Arts Centre. By 1920, the College was fully registered under the Bursary Endowment Act of 1912.

Over the next 50 years, St Joseph’s College became a highly regarded boarding school for girls, preparing students for the intermediate and leaving certificates. The College earned a reputation for its high academic standards with many students gaining university bursaries, Commonwealth and teacher’s college scholarships.

As extensions continued, St Joseph’s became known as one of the leading independent Catholic Colleges for female boarding and day students. In the mid-1970s, the Sisters agreed that the College become part of a system of schools managed by the Diocese of Maitland, however, the Sisters maintained the role of Principal of the College till 1990 when the first lay principal was appointed.

1992 saw the amalgamation of St Joseph’s with St Peter’s and St Mary’s Maitland to form the entity of All Saints’ College. This structure remained in place until 2018, when the College returned to its single identity of St Joseph’s College, Lochinvar.

The heritage of our College is an inspiration for all of our students and continues to shape and guide our vision and mission. Within the Dilley Library, the Sisters have established a heritage gallery that contains a wonderful collection of items and documents that enable students and visitors to develop an understanding of our history and the vision and commitment of the Sisters.

The crest is based upon one designed early in the 1900s by one of the Sisters. The Sisters of St Joseph, founded by Father Julian Tenison Woods and St Mary of the Cross MacKillop, established the school at Lochinvar in 1883.

The colour of white, blue and ochre feature in the crest. White has a traditional association with St Joseph. Blue is the colour of St Mary, honouring St Joseph’s support of her. Ochre represents the earth, honouring the landscape and the traditional owners of the land.

What do these symbols represent?

Mary and Joseph are special patrons of the school, hence the symbols for them on the school crest. The Scriptures represent the word of God and the Good News of Jesus.

The Sisters of St Joseph are an Australian Order founded to work in Australia and with Australians. Hence, the Southern Cross, symbol of our land Australia.

The College motto is “Strength in Difficulties’, derived from 2 Corinthians 12:9 which forms part of our Mission Statement. 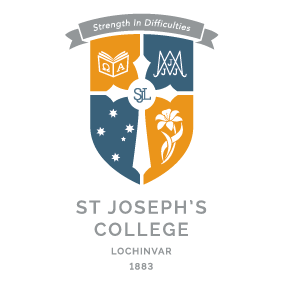